I've really been trying to wrap my head around what it is exactly that I want to say about last night. 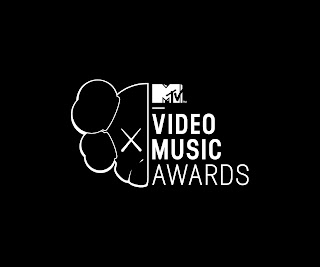 See the VMAs to me used to be amazing. I'd stay up late to watch them, or sneak to the basement after my mom fell asleep. Then spend the entire next day discussing with my friends which performances were amazing. Whose outfits we'd steal. What was the 'moment' of the show.

I guess that hasn't changed too much. I stayed up way too late last night to watch them. I had to wait for Boomer to fall asleep, and I have spent much of my morning....discussing what the hell happened last night. We all know what the 'moment' was.

Here is my biggest difference or distinction. When Britney Spears came out and danced in a sparkly nude outfit, she was pushing envelopes sure, but she put on an AMAZING performance. Same with the 'Slave for You' performance. Madonna writhing around in a bridal dress, and then years later kissing Christina and Britney. Those were iconic, showstopping, GREAT performances. When Rihanna does her thing she is putting on an EPIC performance. She's not trying to be a bad girl, she just is these days, and she's good at her job, which is being that bad girl Rihanna. 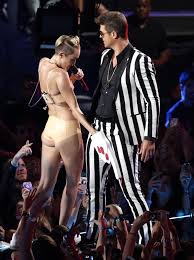 I'm not hating. I'm not bashing. That performance was trash. She was out of breath and off key. She wasn't dancing, she was doing some mess you can see in a club on any given weekend in any given town. That wasn't avant garde. That wasn't pushing an envelope. Hell, that wasn't ANYONE'S definition of sexy. And Trish, yes we saw you in the audience smiling, so I have some thoughts for you too. Let me tell you RIGHT NOW, if Boomer becomes a famous pop star and tries to do some mess like that.... I will stop it. It will never get past rehearsal. I don't think my mother would let something like that happen to me NOW.

Even Britney's worst VMA performance EVER gets a pass. Home girl was CRAZY when that happened. 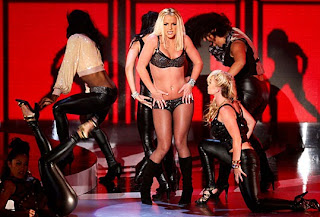 Miley you are not. You are not on drugs. You are not going through a public divorce. You're not in the midst of a mental crisis. You are just trying too freaking hard. You're like the 25 year old who has never drank in their life and now can't stop talking about how 'super drunk' you got this weekend.

Its fine to be trying to find yourself. That's cool. We've all been there. I actually like your song. I think its catchy, and if that's your scene these days ok cool. As an artist though, what you put out into the world last night wasn't a good performance. It was just a mess. I've seen you perform that song better on a few occasions. You just....you dropped the ball last night so bad. 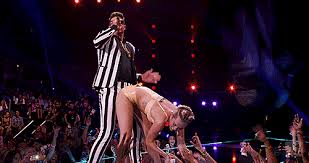 Robin, I'm disappointed that you let that happen.

Paula, I'm disappointed you let that happen to your husband.

Every rapper who keeps giving Miley 'street cred' and 'ghetto passes'...stop it.

Now onto the good stuff...yes there was a bit.

Lady Gaga. I feel like I need to do every workout that lifts your butt. Say what you want about Gagaloo, she's weird and crazy but she puts on one helluva show! 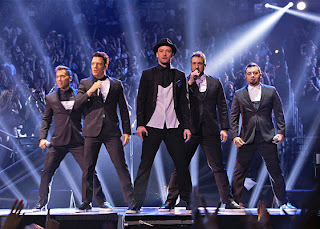 Justin. Wow. Miley should take notes. Did you guys see how EVERYONE in that audience was up dancing and singing along with him. That's was good music, and great showmanship does for you. He put on a great show, as he always does. To see all my N'SYNC boys together again even for 30 seconds made my little 90s girl self so damn happy. I actually hurt myself. Can't turn my head to the left this morning. So worth it. Don't even care.

Bruno. Bruno Mars could sing me that song any day of the week and he could get it with his short little self. I heard it live earlier this summer and felt the same way. I mean...just. Yes.

Macklemore. You were a black preacher in your last life. Your performance was great, your message is great, I love what you do and stand for. Good move popping out with Jhud too. Took us all to church.

Katy Perry.... I love your song girl I really do. It gives me church moments too. The performance was just a little...meh.

So that's my two cents about all that....

I have to finish watching it tonight - I've only seen the first hour, but OMG Miley was a mess (and not even a hot mess). Her singing was horrible, she wasn't sexy in the least and for God's sake girl, put your tongue back in your mouth!

Well said about Miley!! That wasn't a performance, it was an exhibition, and it was sad.

Helene in Between said...

YES the rappers giving Miley street cred... WHY? I LOVE the bruno performance!

miley was off her rocker. i was just so confused the whole time. gross. but jt was fantastic!
-- jackie @ jade and oak

Ditto to all of this, girl.

"Took us all to church" haha I love it. I didn't watch it, but I saw clips from Miley's performance & Justin's.

Justin was PERFECT as usual (I am seriously dying to see him in December!!!!! CANNOT wait!).

Miley...I just....girl, stop. I was going so hard as a miley fan, but after the last couple of weeks I'm just like- Girl, please have several seats and quick.

I like bad girls who upset the masses so Miley was fine with me.

I thought JT was never going to stop. That was an incredible amount of time they gave him. More than was necessary, IMO. But it did remind me how much less annoying he is to me as a singer than as an SNL guest. He should have stopped at Dick in a Box with that! Go back to the music, JT.