My computer was MIA this weekend because it was being used to help Momma Boom finish her disertaion proposal. (The continued watching of this epic battle may or may not have put me off grad school for the forseable future.)

However while bored for a few minutes I decided to do my first ever Vlog. Woot!

(If a tree falls in the forest and no one hears it...did it make noise?)

Anywho....Boomer decided she needed to help me out. This is actually attempt #2!

So there you have it. Maybe I'll do a part two of how I used to say things when I was living in the South. Tennessee for two years changes a girl. (In a great way!) The majority of my family is from the South and I identify with it.  (I think I scarred my mother for life telling her that I identified with Scarlet O'Hara.)

Have a great week!
1 comments

Songs of my Youth Part 1

I don't know why I did it, but last week I made a Backstreet Boys Pandora. Aaaaaaaaaaaaaaaand its pretty awesome actually. I've been belting out 90s bubble gum pop for days. Boomer thinks its beyond ridiculous. (Take THAT Beiber.) Anyway it got me to thinking how these songs were just so deep and meaningful back in the day. I would play them over and over and write in my diary about all my angst. Ah, so much angst. Degrassi had nothing on me. (Or so I thought.) It also got me to thinking how....things are a little different now. Take this gem for example.

This is absolute foolishness. Basically I used to sing this song at the top of my lungs whenever someone told me I was wrong for dating a particular boy. I LOVED him. No one understood our love. We were going to get married. We discussed how we would decorate our house. (It involved a lot of black and gold, and looking back was slightly horrendous.) Let's call this gem of an ex-boyfriend....Mr. Pitt. Mr. Pitt, was something of a compulsive liar. Which was odd because we grew up together and I always caught these lies....but I LOVED him. He was also very controlling, and tried to get me to change a lot. He was always trying to get me to go against the values I held dear and things I'd been taught. (In fact you can trace about 75% of my teenage rebellion and issues with Momma Boom to this relationship.) When friends and famliy would caution me about our relationship, this song was my mantra. They just didn't know him the way I did. He loved me. He was cute. He was a great kisser. (Cuz at 15 I was a notorious virgin. There were bets on how long it would last.) He's almost 30 now. In hind sight....he was an awful boyfriend, but I learned a lot.

Now I know. There is a lot that matters. I absolutely care who you are. Did you change your name, are you on the run?

I care where you came from. People say opposites attract and that may be true, but opposites have a lot of trouble living together or agreeing on how to live and raise a family. Trust me on this one. Background matters.

Duh, of course I care what you've done in your life. Are you a compulsive liar, a cheater, are you bad with money, did you beat your ex? This is all NEED TO KNOW.

Saying you love me isn't the quick fix salve it was in high school. Shoot at this point in my life I may want to know your credit score and debt to income ratio.

Labels: About me, Boyfriends, Relationships, What I'm Thinking

Hi Lovelies!
Today on Valentine's Day we're all linking up with Kristina over at PrettyShinySparkly for another one of her Bloggers Do It Better challenges. This is the second one that I've participated it and its always so fun to see what everyone come up with.

I have to say I generally don't care for Valentine's Day. It seems silly to focus so much attention and effort on  showing someone you love them on ONE day out of the year.

Most of my IRL friends will tell you that I'm bitter. They're right. In happier (younger) days I was delighted to recieve a dozen red and white roses at church on V-Day weekend. Or in college when I recieved a V-Day package from my best friend. (Who I was pretty much in love with.) But yes...these days...I'm a little bitter.

This year my Valentine's Day attention will be focused on Boomer, and the ridiculousness that is V-Day at school. At least in kindergarten its not a popularity contest yet. Because you know once they start doing the flower fundraiser in middle and highschool it totally is.

I've also been disturbed and worried lately about the disconnect I feel with a lot of my friends. We don't see each other but we live in the same city. Or my out of town friends that I just don't talk with like I used to. I remember sitting in the loop between Thatcher and Talge Hall promising Kas that we'd never drift apart. And we have. I know its part of life, but it still makes me sad.

So today, I'm writing letters and reconnecting with my friends and loved ones. Its so fun to send and receive mail. So be on the lookout. 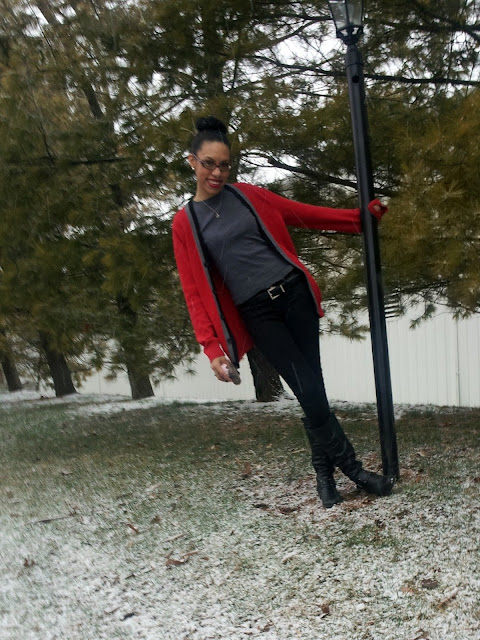 I'm also wearing my favorite red lipstick which you last saw in this post. Make Up Forever in Moulin Rouge.

Of course I have to give a special shout-out to my photographer and Valentine.....BOOMER!!!! 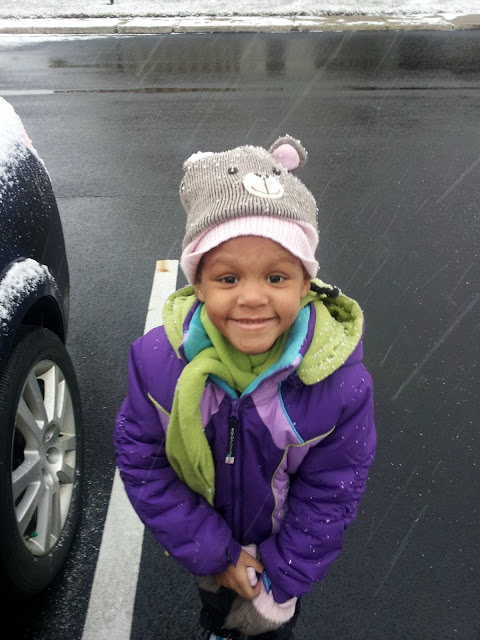 She is soooooo much fun. Even if she does cut off Mommy's head in a lot of shots.

Labels: BDIB, Boomer, What I Wore, What I'm Thinking

It's ok....that I have ordered grilled cheese twice this week at work. I like what I like.

It's ok....that I'm still wearing my foundation from this summer and I'm a little pale now. Brush it down your neck and ears and no one knows.

It's ok....that I created a Backstreet Boys station on Pandora and I spend my shower time belting out hits from the 90s.

It's ok....that I cried like a punk while Boomer read a Tinkerbell book to me this afternoon. SO PROUD!

Labels: About me, Boomer, It's ok Thursday, Mommyhood

No MMM this week. There wasn't even going to be a post today. I'm exhausted. I started my NEW JOB today and then went straight to my current sales girl gig at the mall. Whooopie for 12 hour days. That involve children. I'm sitting here catching up on my blog reading though, and I said I was going to try and commit more time to the blog so dangit I will.

First things first. That's right kiddies, you read that correctly I got myself a spanking new job. I went in for the interview on Friday afternoon and walked out about 20 mins later with a temporary job. Yeah....its temp. However its full time, and in the industry I want to be working in. I'm so excited to gain this experience. Fingers crossed it leads to something permanent.

So great start to the weekend right? Then Saturday I actually made it to church. This is kind of huge. Boomer wants to go every week and I love that. But usually Saturday's are my ONLY day off and I wanna sleep dang it. I thought it would be pretty rude though if I pray and pray and pray about wanting the temp position at this great company and then I get it....and then just skip church. So we went. Yay! This is a picture of Boomer after church at Momma Boom's house. Cuz she is stinkin cute.

Saturday evening I went to Holly's house for the wine tasting party she had to celebrate THREE YEARS OF BLOGGING!!!! Yay Holly! Well truthfully my butt got lost. Then I went to Holly's house. Can I tell you guys I really like these girls. They are so fun, articulate, lovely....I could gush all night. They're crazy though....because somehow they have me thinking that I can run a half marathon with them. All I did was offer to cheer them on with noise makers and suddenly it became 'Oh no, you can totally do it. This is where we are getting the shirts.'
Have a great week!

When You show a five year old your boobs....

Get your minds outta the gutter lovelies!

Last night I had the genius, inspired idea to turn on our old desktop and look at baby pictures of Boomer. It was so fun. She watched the video of her first steps and giggled. There was another one of her and I in the backseat laughing hysterically at nothing. Then there was her first bubble bath, and her saying Love you and Thank you. (Both of which sounded exactly the same by the way.)

Then we came across the gem of me nursing her. There is ONE picture of this happening though it went on for six months. (Haha...no not sharing.)  I went to quickly move onto the next picture, not because it was weird or uncomfortable. (I am nude A LOT...lol it comes from growing up in a house of nothing but girls. Then my college roomie was super uninhibited too....seriously if Boomer was a boy she'd probably be a little wrong in the head....anyway) I moved away because Boomer asks questions. Unending questions. Uncomfortable unending questions.

At this point I finally dispensed with the yeps because I realized that she was NOT going to let go of this bone. So I explained that some mommies chose to nurse their babies. That after you have a baby your body is equipped to feed them. That I made the choice to do so for about six months until she became the bottomless pit of feeding and I wanted my body back. It had been almost 18mos for crying out loud. (Boomer would nurse both sides, eat cereal, have a small bottle and want to nurse again. NOPE! All done!) I told her that it was nice. It was a way that I bonded with her. It was the one thing that I could do for her that no one else could. She looked at the picture and said.....

And that my friends is a whole other post.
2 comments