This Is My Current Single Status

My declaration of independence...

If you're singing along with the Natasha Bedingfield song in your head right now, give yourself a cookie. No really. Go get a cookie! It's ok. I'll wait.


Alright now that that is out of the way...

I've been single now for the longest stretch of time since I was 12. Basically since I discovered boys don't have cooties. I'm what my friends like to refer to as a serial monogamist. I don't think this description is entirely accurate considering I didn't start sleeping with boys until JJ, but its true I have in the past gone from relationship to relationship with barely a breather. I also have a habit of recycling ex-boyfriends, or dating people that I've known FOREVER. They weren't all serious relationships. I mean how serious can you really be at 12? Nonetheless I have always had a boy on my arm, one waiting in the wings, and a follow up prospect to him too. I was a shameless flirt all through high school, but all the boys knew it was a game. You could look, but you couldn't touch.

The idea of being forever alone was terrifying a year ago. I moved out on my own in October of 2012, and went into a bit of a 'thing' with an old friend. It was silly and pointless and going no where despite our 'feelings' for each other. That January I met a nice guy at a friends party and we went out a few times. We were watching TV one night when it hit me. I didn't really want this. I wasn't ready to date. I didn't want to get to know anyone when I barely knew myself.

That's right. 27 years old. A degree, a career, a child, and no flipping clue who I was. That's scary. Frightening. I'm supposed to be raising a child, helping her to figure out her way in life, but I don't know my own? My mother had told me for years, 'stop hopping from relationship to relationship. Slow down. Take some time to get to know you!' I dismissed her. She was my mom. She didn't know what she was talking about and just wanted to run  my life. I finally realized she had just been trying to help me. In all that man hopping I hadn't found love or security. I'd found a lot of trouble. The older boy who was just trying to get one thing. The emotionally abusive boy, who convinced me I was a crazy pill head. The bad boy that I could save. The elusive boy I could chase. The perfect boy I could be a trophy for. The project. The rebel. The saint.

I'll be the first to admit, I have some Daddy/abandonment issues. I remember relaying the following to a therapist once:

My birth father gave me up for adoption. My adopted father left the marriage. My grandfather died. Then my uncle disowned me instead of dealing with the pain of his loss. I've been abandoned by every man that was supposed to stick by me and support me.


She was ridiculously impressed with my self awareness. I wish I'd known about this gif then.

I spent the last 12 months getting to know Whitney. Really getting to know her. Enjoying the quiet and the solitude. Enjoying the underwear dance parties with Boomer. Enjoying answering to no one, but God. Learning that I like classic movies, and documentaries. That I actually can't stand a lot of shows that I spent hours of my life watching so I could have something to talk about with some guy. I actually don't like boy shorts, especially one's with seems up the front (atomic wedgies anyone?) and threw out every pair I'd bought to make a guy happy. I like my hair wild and crazy. I like it straight too, but it's my hair not to be tamed and cajoled to make another person more comfortable. I like wearing too much makeup sometimes. I like wearing heels even though they make me 6ft tall. I like singing in the shower, and the car, and the kitchen, and pretty much every where else. I like being goofy and silly. I like spending hours looking at expensive shit I can't afford. Yet. I like thinking deeply. I like reading books quietly to myself. I like my face. I like my body. I like my spirit. I like my temper. I like my heart. I LIKE EVERYTHING ABOUT ME. 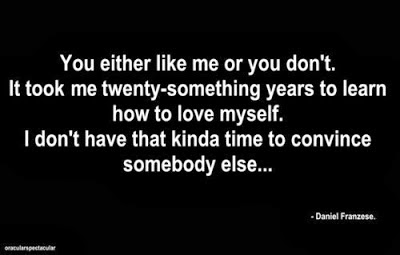 But there's no rush.

beautiful post, Whitney. it's SO TRUE! you have to know yourself in order to love yourself and find happiness within yourself. only then can you find happiness with someone else. when people seek happiness from external sources, they will forever be unhappy because no boyfriend, job or person can fill a void that you have in your own heart; you have to fill that with YOURSELF.

This is so great!! I've been doing the same thing for the last 2 years and am so happy I've had the opportunity to do so.

I def know the feeling Whitney! Up until now I was always either in a relationship or "talking" to someone..I def needed these past two years of singleness to figure out who I am and what I actually want! No one can ever make you happy like you can

You know exactly where I stand with this and I'm just so proud of you. So amazing, so inspiring, SO STRONG!! Love you!!

I'm so happy you feel like you've found yourself and even more importantly that you LOVE that girl! Keep it up, lady! Inspiring.

Well if this isn't the most amazing post I'll read today then just shoot me. This was beautifully amazing! Girl power.

Think it goes without saying, but you're amazing. Le duh.

love that you have found yourself more and discovered your awesomeness! some me time is important and necessary!
-- jackie @ jade and oak

Nicely written, in my 40's, newly seperated, I could totally identify with this, have a man, have another that you keep around just in case first one doesn't work out. I finally woke up and realized how empty all this was. Now I know me and I have just met an amazing man that I do not put a show on for and he loves me for me.

Yes.
Yes!
YES!!!
This song is my anthem. I've been single for far longer than I'd like to admit here for fear that you all would think I'm a freak, but it's been the best [insert period of time here] of my life. I have finally found myself and realize that I like my own company far more than I like dealing with someone else's issues.

wonderful, wonderful, SO wonderful! My single time, although dramatic and also included some recycling of exes and "friends"...it was the best time for me. Enjoy it and enjoy yourself - although I think you already have that part down! xoxo

love this, whitney!! i can't put into words exactly how much i love this, but just be aware it's A LOT.

hope to see your rockin' self again soon. :) xoxo

Fantastic post! I wish more women I know would realize that they need to take time to get to know themselves and not rely on anyone else to define them.

Raewyn @ Be A Warrior Queen said...

This is such a wonderful post!!!!! I am so happy that you took the time to get to know yourself and love yourself!! It's hard work and one of the things I am striving to help girls and women do with my movement!

I totally forgot about this song and how much I love it...! :)
In my opinion, you'll never be happiest in a relationship unless you're the happiest you can be with YOU! So keep doing your thing my love! :)

It's great that you are getting to know yourself. Some of us kind of forgot how to do that along the way.

This is amazing... i kinda went through the same thing, always dating someone and I would continually go back to the SAME guy for almost six years! It took an ugly wake up call and a lot of alone time to figure out who I was as a person, and not a significant other. I had to completely rewrite myself... i lost all of my friends because they were all friends I met through him, and not because I didn't like them anymore, but because it was unhealthy for me to be around that circle anymore. I move to a city where I literally knew one person and rediscovered myself. It was tough but now I'm in a happy and HEALTHY relationship. You will get there, and you're right, there's no rush!

I LOVE this! I'm only 21 and I have a long way to go I think, but how great would it be if every woman out there took the time to just sit and write out a list of the things they really truly love, without any influence of others? Thank you for this post!

umm hello! You better find yourself girl! I had the same epiphany a couple years ago that sparked my move up to NYC, except that I was in a relationship (with my now fiance). NYC provided the 'me time' I needed to figure out who I was, what I wanted out of life and where I wanted to go. The toughest part about being in a 7 year relationship was/is maintaining who I was as a person, being able to change and have that other person change and grow with me as well. I definitely think the journey to finding myself would've been so much easier if I was single but life is life and I've made my choices and don't regret a single moment. Finding self love is so important and I'm so happy you've found it for yourself. :)

YES. So, I'm only 21 but I still have been "with someone" since my junior year of High School. Who am I as a person, what do I like? You just hit the nail on the head. I have been doing some soul searching, but it's time to do more, and stop feeling sad when assholes on Tinder don't text me back.

I love love love this! I have been single for just over 12 months now and I have grown to enjoy every minute of it. I don't know if I want to share this hot and fun with someone else. I like being with just ME....for now