Jack is a Loud Mouth

I know. That is a weird title for a post.

I had a cat when I was younger. His name was Frosty, and he was the most beautiful Russian Blue. He was fat, my mother preferred to say well loved, and chill. I used to joke I wanted to marry a man like Frosty. He was quietly affectionate, loved Jazz, enjoyed a good cuddle, and was just an all around sweetie.

First of all, he talks. All. The. Time. I literally did not have any idea that cats could be so damn talkative. First thing in the morning, before I've had any coffee or even gone to the bathroom there he is having a completely one-sided conversation with me through meows. When we get home at night, there he is bounding down there stairs meowing in such a way, that it seems like we are being scolded for letting in cold air, or leaving him alone so long. When Boomer does her homework, he lays down on whatever piece of paper she isn't writing on at the moment and proceeds to 'talk' to her for 10 minutes.

He will hold your arm in his paws if you try to move away from his loving bath. I think we all know that cat tongues feel like sandpaper. If we sit together on the couch to watch Star Trek I have to eventually hide my hands under a blanket. Undeterred he will then head for my chin. 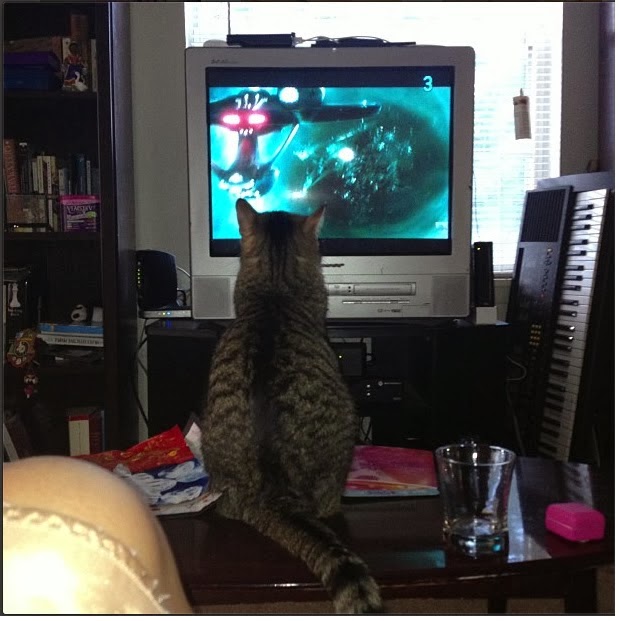 Oh yeah. He likes Star Trek. I have finally trained him to sit in my lap, and not the coffee table when it's on, but he loves that shit.

Yes. We call him kitty boy. In baby talk. Whatever.

aww! he sounds like he has so much personality. love that he "talks" to you guys all the time haha. too cute.
-- jackie @ jade and oak

This is the cutest!! I'm a dog person but if I had a cat like this it would be just as awesome.

There's nothing better than a furry baby to snuggle up (and watch Star Trek??) with! :)

I love that he talks to you all the time, that made me giggle. Also the whole licking thing, Roxy (though she is a dog) does the exact same thing - so at least I don't have to deal with the sandpaper tongue. What a cutie though!

He sounds awesome! And hey - free exfoliation treatments with that rough tongue, haha! :)

I dare say there is nothing more fun than cat tongue.

You had me at cats and Star Trek.

I LOVE that my Linky Cat is talkative. OK, so its annoying at 3am, but I love his meows when I walk in the door. I think Linky and Jack would get along superbly! I sing the craziest songs to Linky Cat. When he comes in in the morning, I sing the Good Morning Song, which is (I'm not kidding) me singing "Good Morning" over and over to the tune of the Tiny Tunes Adventures theme song.

It's no wonder I had to start seeing a therapist!

You go on with your bad crazy cat lady self!

Hi whitney!! Omg he sounds like a prince! Too freakin' cute! What a great personality! Def. post more about him in the future! xoxoxo

Your blog looks fabbbbbbulous! I love it.

Okay, jmeoww DOES NOT SHUT UP EVER. Her and Jack would have SO much to talk about probably. I wish she was just as nice as he sounds...

He sounds seriously awesome. Like, a dog-trapped-in-a-strange-cat's-body awesome. (And in my world that is a majorly good thing).
I want to meet your cat.