Boomer and I drove down to Chattanooga on Friday to see the Sonrise Easter pageant that they put on every year at The Collegedale Seventh-Day Adventist Church. I went to college the first two years at Southern Adventist University in Collegedale TN (just outside of Chattanooga).

So anyway...I remember seeing the pageant and being incredibly moved by in when I was in school there. Boomer is actually really....spiritual...for a five year old. I thought she would really enjoy the play. It starts of in the church. The scene is different every year. This year, because of the recent tornado activity in that part of the country, the opening scene was of a tornado damaged home, and then various other scenes of people in trouble. They played Third Day's song 'Cry Out to Jesus' and angels appeared to each person in their time on trouble. Then 'Jesus' appeared floating over the stage. Everything fades to black and then Peter comes in. His monologue invites all the participants to follow him because Jesus is coming to Jerusalem. You walk out of the church and there is the beginnings of the city of Jerusalem. 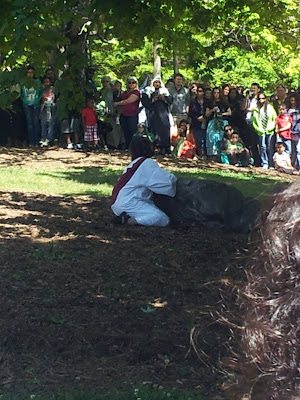 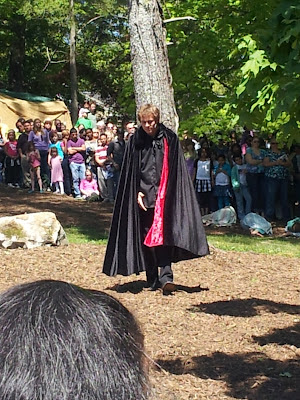 After you go through the passion play up to the Crucifixion you walk into the gymnasium, which has been transformed into a dark burial area. On the stage is the tomb, and people preparing the body for burial. Mary of Magdalene shares her story of Christ's love for her and then as the soldiers approach everyone leaves. I asked Leila if she was worried and she said, 'No Mommy, I mean we know how it ends.' The devil appears again basking in his triumph, but suddenly there is thunder and a flash of lightening. The ground shakes and the soldiers attempt to run away out of fear. An angel appears and does battle with the devil. There are more fireworks, and thunder and then the devil is defeated and thrown into the flames of hell. (Its pretty dramatic.) As the song 'Arise my Love' by Newsong is playing the angel delivers the message that God is calling Jesus from the grave. He is resurrected and then returns to heaven. (Yeah.....he flies...along with a few angels.) (I didn't take pictures of this or the Crucifixion because it seemed too somber and flashes would be distracting in the tomb scene)

Boomer really enjoyed it. She was clapping enthusiastically when Jesus was resurrected. I'm glad that I got to experience it and share it with her. I'll probably take her back in a few years.

I remember driving to Florida from Ohio O_O

Atlanta is lovely isn't it?!

Wow - this looks and sounds like the most involved passion play I've ever come across. What a wonderful experience, and even better that you got to share it with your daughter! Sounds like you had a wonderful Easter :)
xox,
Cee