Mommy! I want to see the world!

Yesterday when I picked up Boomer she handed me this piece of paper. 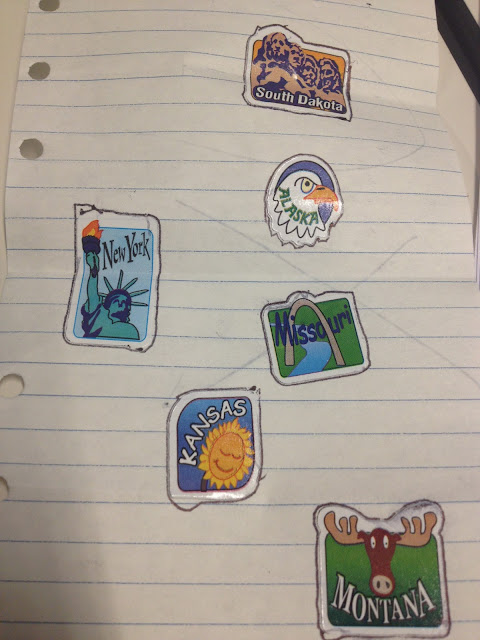 She proudly announced to me that these were all places she wanted to see. 'Mommy, I want to see the world.'

I almost told her that South Dakota and Kansas do not equal seeing the world, but I stopped myself.

She was so excited and enthusiastic, and well....its a part of the world. (No offense to Kansas folks...but its not high on my list of places to revisit.)

I love her excitement. She doesn't yet understand things like the price of plane tickets, and exactly how many hours you have to work to earn the vacation hours to get on that plane. Then the price of a hotel, and the fact that half the world hates 'ugly' Americans. (Add to that my ex saying he didn't want to visit any country where they don't speak American.....oy.)

It got me thinking though. I've wanted to travel my whole life. I've read books about all of these places. Studied them in detail while getting my degree. Learning languages. (Only one really stuck though.) What's stopping me?

Oh I have the usual excuses. I'm broke. No really I am. Single parenting is no joke.

I have Boomer. Valid...I'm not paying for my seven year old to see Europe. Maybe when she is 12 and up...but right now I'm just not willing to shell out that cash for her to have a meltdown in a foreign country. Which would inevitably happen. Like full screaming fit in the middle of the Louvre. Can you imagine?

I don't have time. Ok...this is kind of not true. I have about 2.5 weeks (and counting) of vacation just sitting there. Waiting to be used up.

I don't have a passport. This excuse is dumb. Not like its hard to get one.

So back to being broke. If I could really commit to saving and not eating out (crappy fast food) all the time, and possibly stop buying nail polish, I could pretty easily scrape together the funds for a week long trip by next spring. I'm not saying I'll stay in 5 star hotels the whole time, but its not impossible.

Boomer. I'm sure that I can work something out with my ex, or her myriad of grandparents (no seriously, both JJ and I come from divorces and remarried parents...I counted one day and including living great-grandparents she has 7!), someone could take care of her for 5-7 days while I'm out of the country.

That being said...this beautiful country...even this beautiful state is a part of the world. (YES America is on the globe....fascinating.) While at the library yesterday I noticed a flyer for a walking tour of a historic part of one of the suburbs of Columbus. I thought how cool?!?!? Boomer can start exploring and learning about the world right here! Being adventurous doesn't have to be back packing in the wilderness of some third world country. (Which is oddly appealing togirly girl....).
this

Maybe when I see my mom this evening I'll let her know I want to see the world too.

Labels: Boomer, Confessions of a Mommy, Going For It, Happiness, Mommyhood, Travel, What I'm Thinking

Travel can begin with a single step to a Columbus suburb or a drive to Lake Mackinac. You have to choose what is important to you.. The tool to manage your values financially is in your hands. Start a travel category. I think you should take Boomer to France.. She is getting past the age of meltdowns. Believe me, 12 is no guarantee of no meltdowns. Remember, I knew you at 12 ;-)

She picked NYC. That's my girl!