Hello Lovelies!
So the oh so cute Lindsay from 'From Nanny to Family' and Sharee from 'MomFITingitallin' came up with this link up Blog Friends Book Club. I thought it sounded like fun, so I downloaded the book on my Kindle app and got to reading. 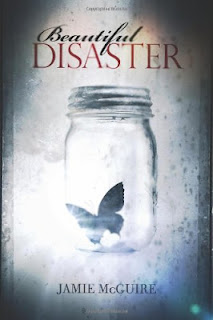 This was the second book they picked and let me tell you...I read it all in one night :)

So here are the review questions:

1) How did you experience the book? Were you engaged immediately, or did it take you a while to “get into it”?

I was into the book immediately. It was such a fun quick read.

2) Do the main characters change by the end of the book? Did they grow, or come to learn something about themselves?

I think they learn to trust each other. The learn to trust themselves as well, which is important. You need to 'know' yourself before you can really make it in a relationship.

The ending was abrupt. I really wanted some more of the story. Maybe a book two?

4) Would Travis be someone you would be interested in dating given he was a "bad boy" with a side of anger issues?

......I hate to say  it but probably. I have a weakness for bad boys, always have. The fighting though would have probably been a deal breaker for me. Only because I would have a very hard time seeing someone I loved hurt.

5)  How did you feel about Travis and Abby's break up?

I kind of saw it coming....and at the same time was annoyed by it. Especially by how long it went on. I found myself saying...'get over it already you two!'
6) Like or hate "Pidge" nickname?

I liked it. Kind of wished I could have a cool nickname :)

So there you have it. My thoughts on Beautiful Disaster. Up next is.....

Thanks for linking up girl! I'm glad you liked the book, I did too. I totally agree with you- it was a super fast read that ended before I would have liked it to. I heard part two comes next year and it is book one from Travis' point of view. Interesting. I wish it was another book about what happened next.

ok so i'm recently back into reading so i maaaay just have to check this one out ;)